February can be a tough month. You’re far removed from the holidays but still a long way from spring. Your New Year’s resolution is probably starting to fizzle out, and Valentine’s Day reminds you that you either have no valentine, or have no idea what to do for your valentine. So, how to take your mind off the February blues? A vacation, of course, during a month where places both warm and cold have plenty of cool stuff going on to help you forget it’s the middle of winter. Here are our 12 picks for the best places to travel this February. 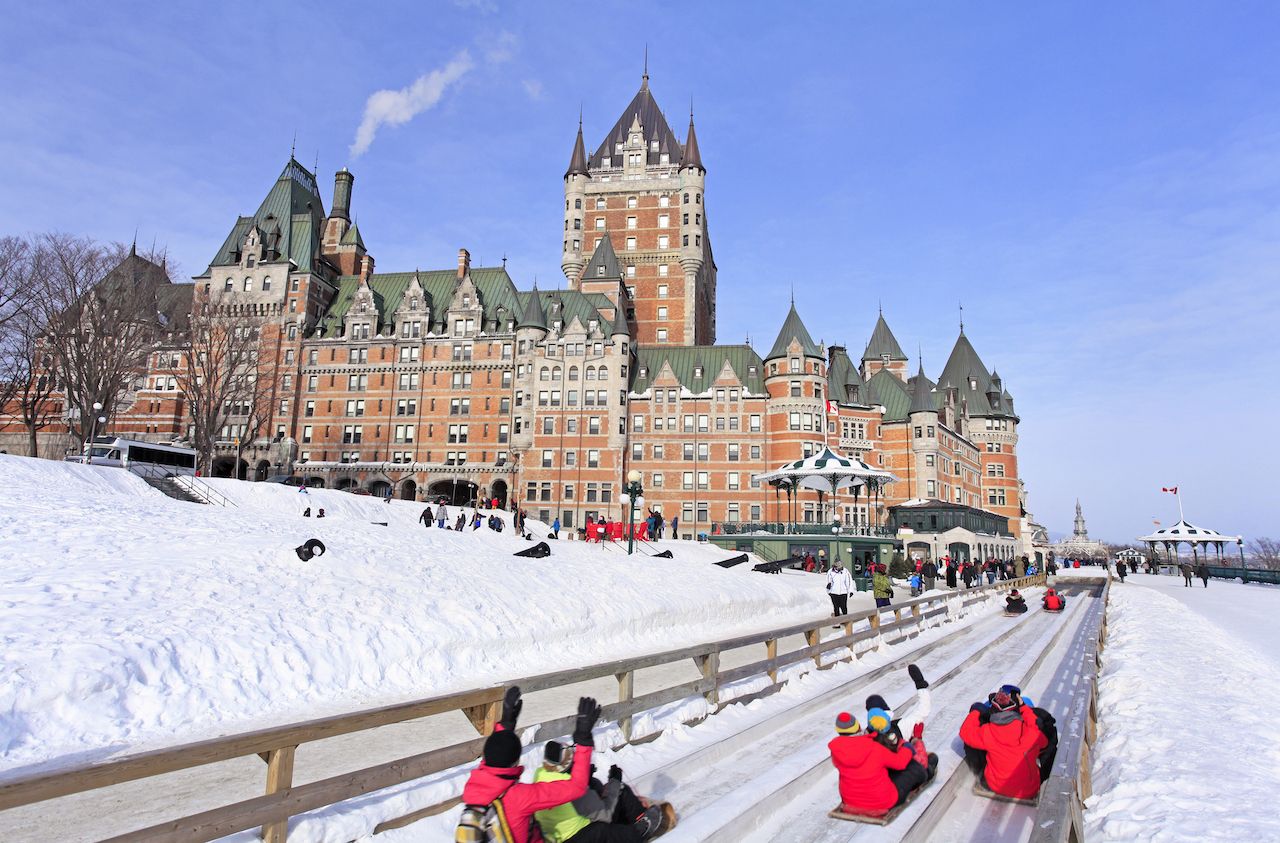 There’s a saying in Quebec — and pretty much everywhere else ungodly cold — that there’s no such thing as bad weather, just bad clothes. Not sure we’re buying that one 100 percent, but when you plan enough fun stuff and wear heavy jackets, cold weather can be a lot of fun. Look no further than Quebec City when it hosts its annual Quebec Winter Carnival from the 7th to the 16th. The city’s streets are taken over by an icy celebration full of live music, axe throwing, human foosball, and lots of people strolling around drinking Caribou from a cane. All presided over by a big, friendly snowman named Bonhomme.

Over in Montreal, Igloofest runs from January 16 to February 8, where electronic and indie acts take the stage at the old port for a massive, freezing party. The thousands dancing on the dock keep it nice and warm, and the party usually spills over into the streets of the old city afterward. But again, you will need a good jacket. 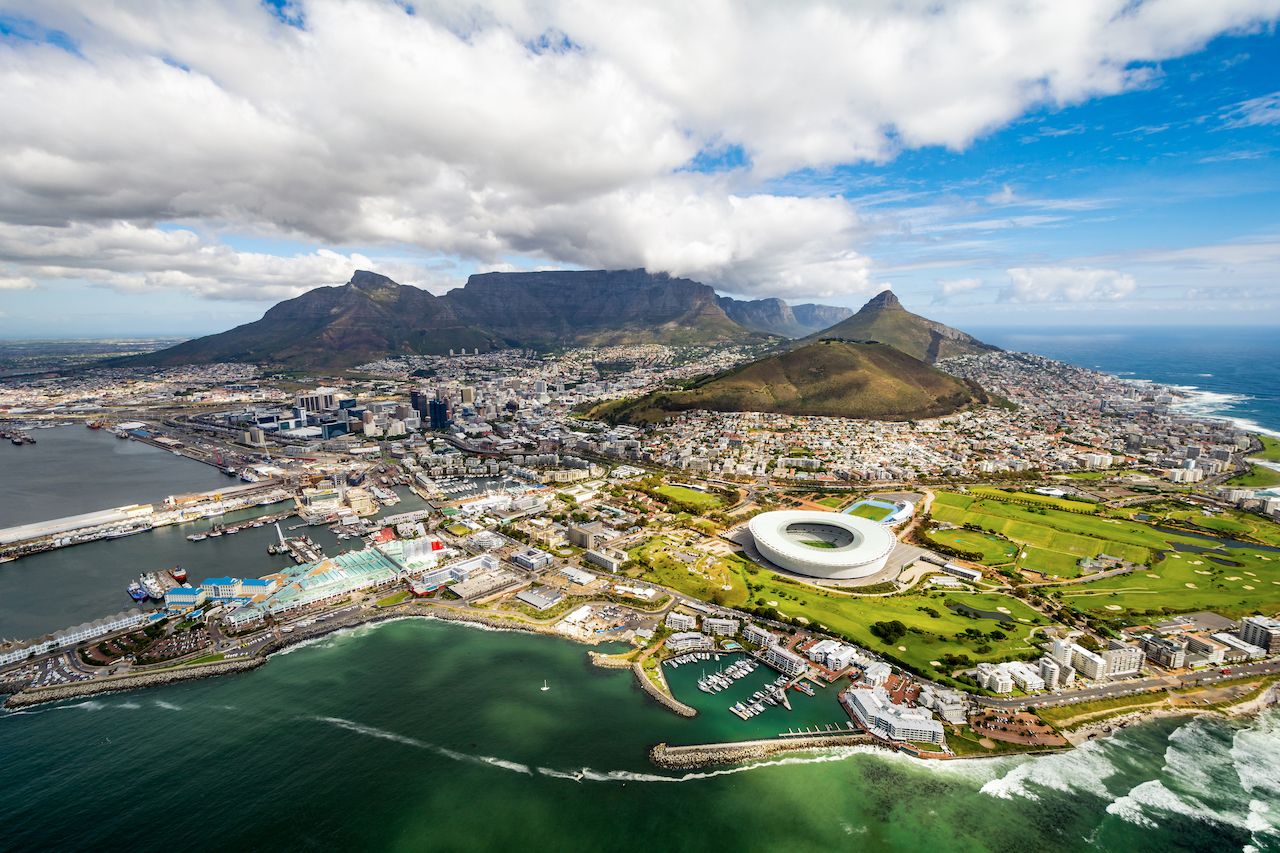 It is, in case you forget, the height of summer in one of the world’s most beautiful cities. Meaning you’ll have extra daylight to climb to the top of Table Mountain or Lion’s Head, and exceptionally clear skies to enjoy the view out over the Atlantic and Indian Oceans. The waters will also be a little warmer if you’re up for a little shark diving. And the long afternoons make for perfectly leisurely lunches in the wineries of Stellenbosch and Constantina, where it’ll be right in time for harvest season.

This winter, getting to Cape Town got considerably easier too as United Airlines kicked off non-stop service from Newark to Cape Town. You might also consider getting in touch with Explore Sideways, which can curate a trip for you with experiences like sunrise yoga on Table Mountain, private winery tours, and starlit dinners in the middle of a vineyard. 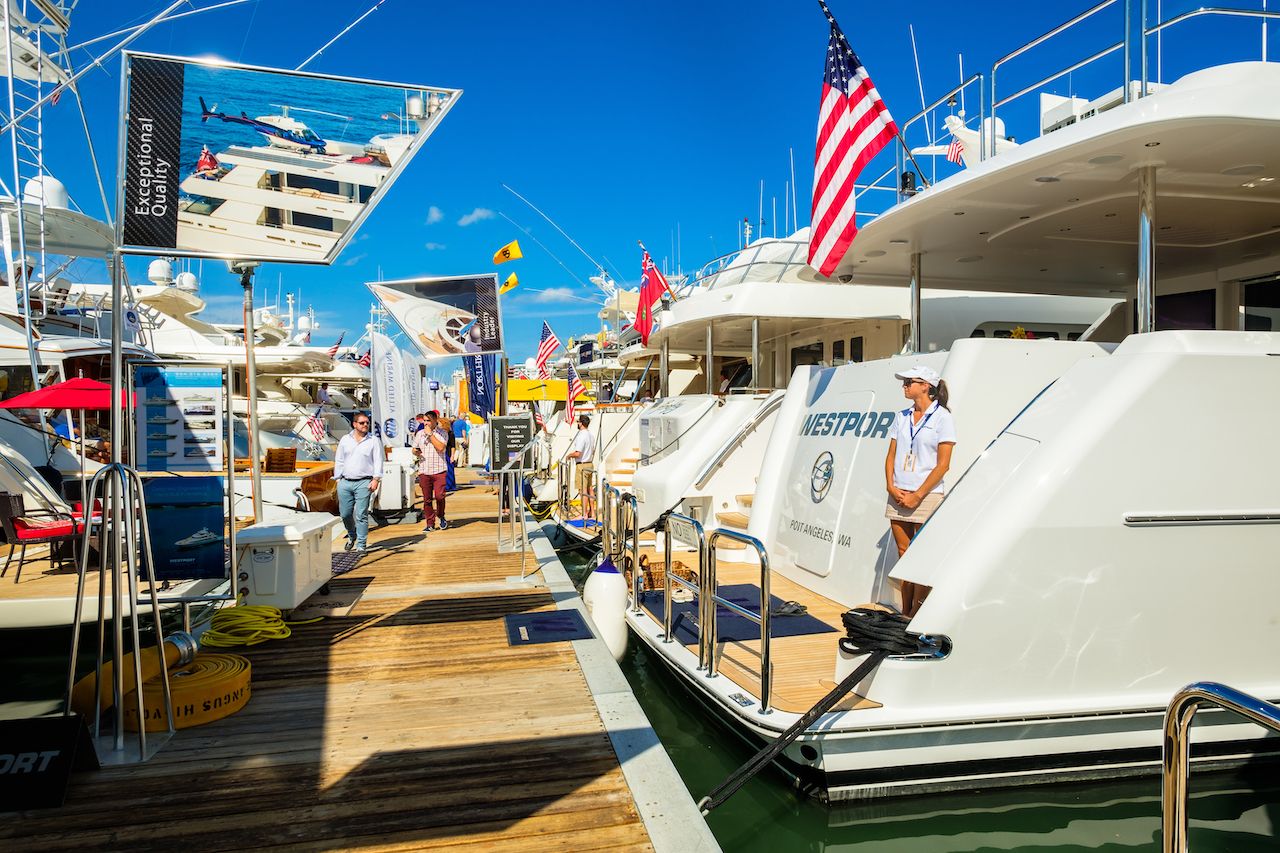 You may not find a bigger month in any city, anywhere in America, in 2020 than February in Miami. The action starts right away when Super Bowl LIV comes to town, an insane week of parties anywhere you put it but especially raucous in Miami. And no, you don’t need a ticket to the game to partake in the festivities. A week after that, the Miami International Boat Show floats in, another weekend of lavish affairs on the water. Much like with the Super Bowl, you don’t need to have any interest in actually buying a boat to get in on the fun, and you might even make some new yachting friends.

Even if you’re not into yachts or football, you are most likely into food. And Miami closes out February with one of the biggest food parties of the year at the South Beach Wine and Food Festival (aka where New Year’s resolutions go to die). You’ll spend the weekend hitting special dinners from the likes of Frances Mallman and Martha Stewart, plus massive sampling events like the Heineken Burger Bash and Guy Fieri’s Barbecue on the Beach. 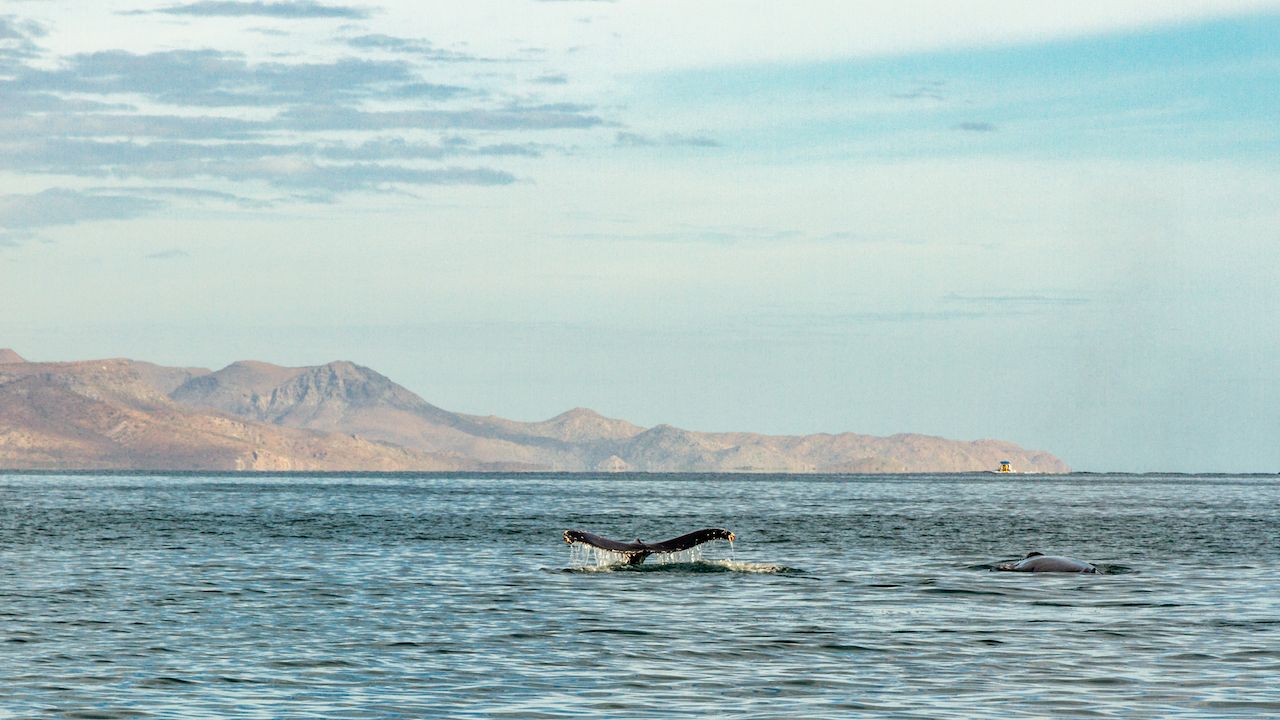 The sunny skies and warm blue waters of Mexico are inviting any time of year, but when you’re three months into winter, escaping to Baja California seems exceptionally glorious. Especially when you’re getting there during the height of humpback whale season, when these majestic mammals can be seen pretty regularly on boat tours.

But the humpbacks aren’t the only attraction in La Paz as one of the world’s great ecological destinations is in full bloom in February. The Sea of Cortez is full of over 900 species of fish and 5,000 species of macroinvertebrates, as well as playful sea lions and massive whale sharks. Get in and snorkel around with them for a couple of hours, or just enjoy the surreal beaches at Isla Espiritu Santo, where red rocks drop right down into clear turquoise waters. 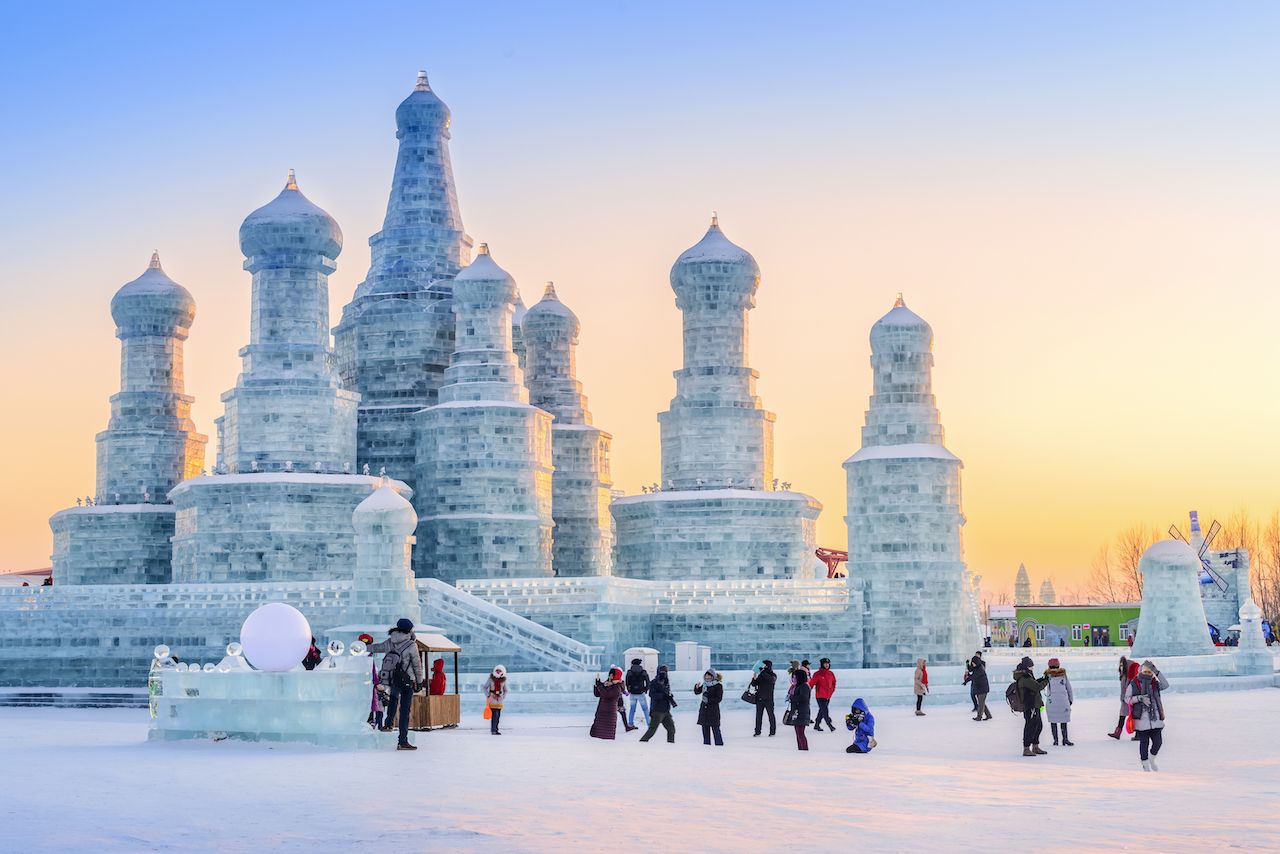 Imagine the ultra-modern, Blade Runner-like skyline of Shanghai… made completely out of ice. That’s not far off from what you’ll find at the Harbin International Ice and Snow Festival, the largest celebration and display of snow sculptures in the world. If you thought the dolphin fountains at your cousin’s wedding were cool, you ain’t seen nothing like Harbin, where entire colorful cityscapes are carved out of ice, as well as hundreds of statues, pagodas, and other creations, some reaching as tall as 150 feet.

The festival runs all month, and though this one-time railroad town along the Trans-Siberian tracks isn’t at the top of most must-hits in China, the festival makes it worth a stop. If you’re not so keen on crossing the Pacific just to look at carved ice, consider Intrepid Travel’s 13-day China Highlights and Harbin Ice Festival tour, which takes you from Shanghai to Beijing with a two-day stop at the festival.

6. Mustique, St. Vincent and the Grenadines 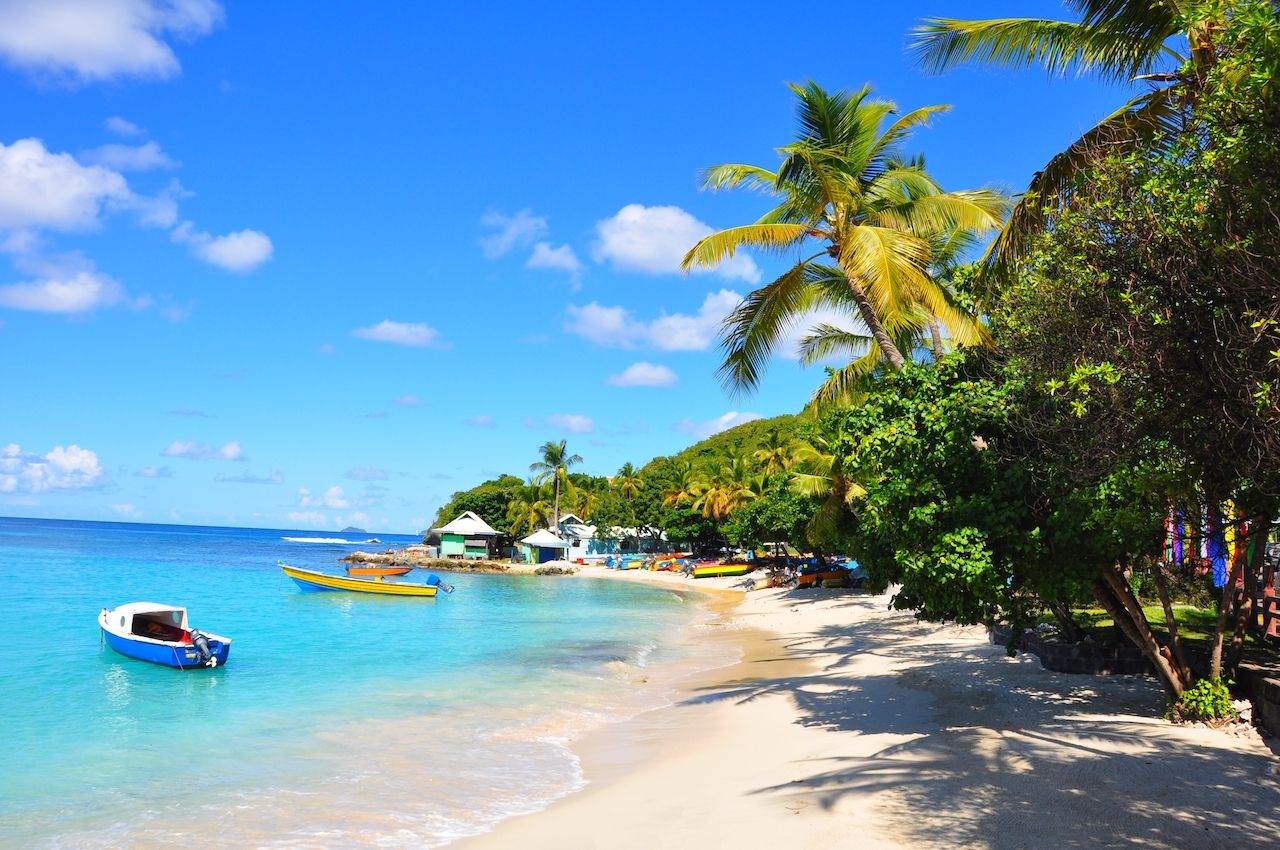 The best blues festival on an island you’ve probably never heard of comes to St. Vincent and the Grenadines to kick off February. The Mustique Blues Festival celebrates its 25th anniversary this year, headlined by Heather Small of M People and Skip Martin from Kool and the Gang. Celebrate the good times with them on this private island, with 75 villas you can rent out for the duration of the festival.

The whole thing goes down at Basil’s Bar, which might sound like a funky beach shack slinging fruity drinks but actually just got a massive Philippe Stark redesign. Pretty fancy for an over-water rum hut, but when the likes of Jon Bon Jovi, Mick Jagger, and Dana Gillespie have been known to stop by and grab the mic, it somehow seems fitting. 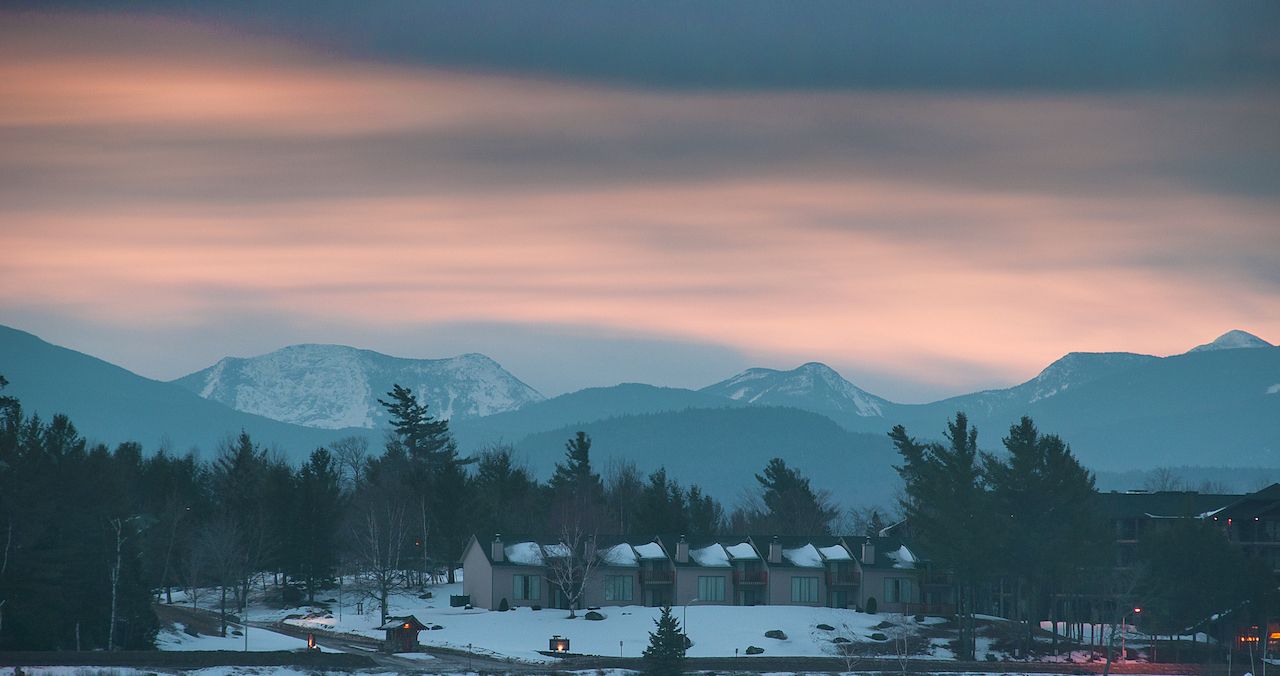 Here’s your fun bar trivia fact for the weekend: What is the only city in the US to host the Winter Olympics twice? You guessed it, the same place that shares its name with a Bill Pullman B-movie thriller: Lake Placid! This February, the whole town will be like a giant hot tub time machine, taking a winter vacation back to the 1980s to celebrate the last time it hosted the games. The 40th-anniversary celebration runs from the 14th to the 23rd and will include a re-creation of the opening ceremonies, a torch lighting, and skiing with former Olympians.

Though Al Michaels will sadly not be there to rhetorically ask if we believe in miracles, Olympic greats like speed skater Dan Jansen, figure skater Paul Wylie, and skier Andrew Weibrecht will be on hand. You’ll also have a chance to learn how to luge, hit plenty of ‘80s-themed parties, and even watch Disney’s Miracle movie at the Palace Theatre. 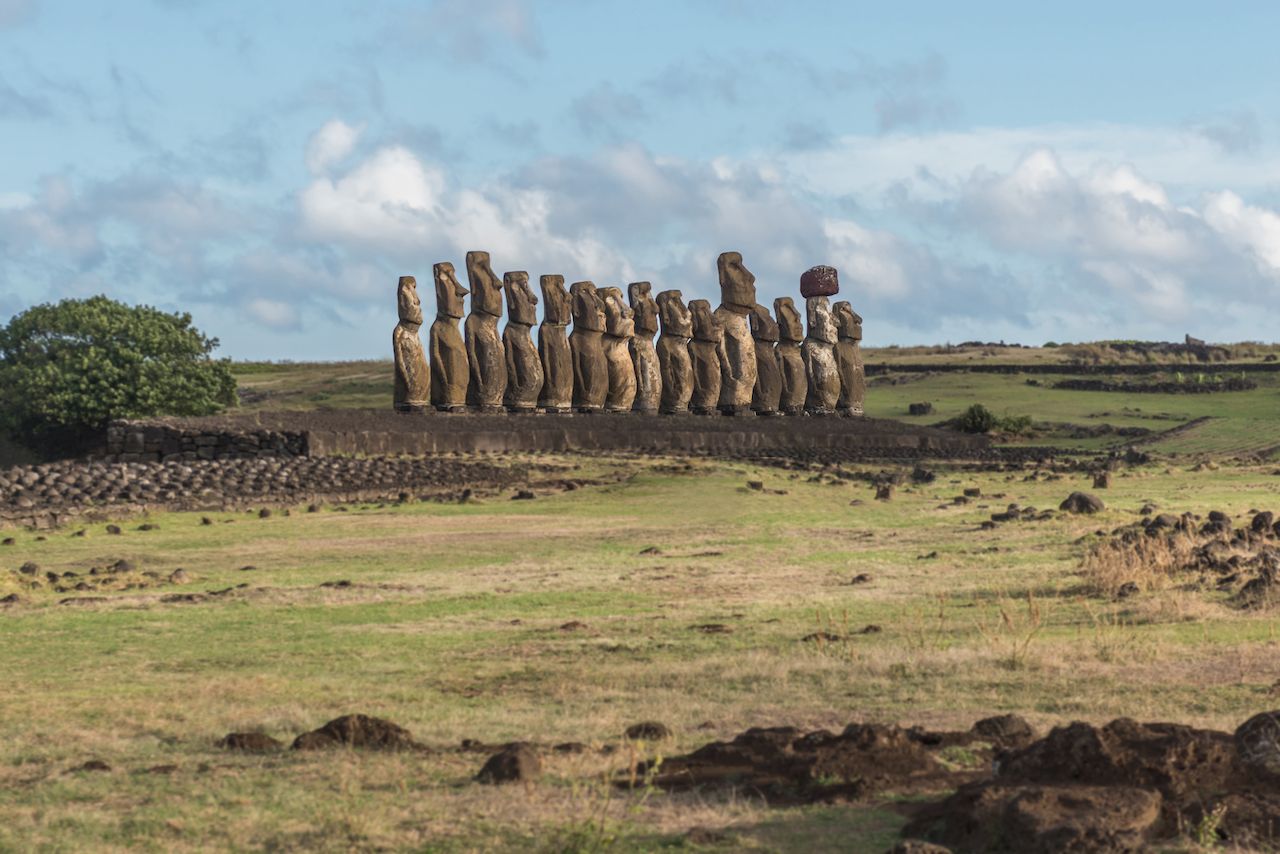 You know those massive heads with triangular noses and square jaws you most likely recognize from tiki mugs? They’re called moai, and come from the Rapa Nui people on far-flung Easter Island. This Polynesian territory is technically part of Chile, and Rapa Nui National Park is where you’ll find nearly 1,000 of these things, dating back to the 13th through 16th century.

Though not easy to reach, Easter Island is best visited in February, when the Tapati Festival runs from February 1-16. While most months you’ll have to search around a little to immerse yourself in the island’s culture, during these days, it’s on full display. The island’s people split themselves into two groups during the festival, representative of their ancient castes. The groups then compete in sports, artistic displays, dance, and other traditions, all open to the public. The whole thing ends with a huge parade and the ultimate coronation of the Tapati Queen. 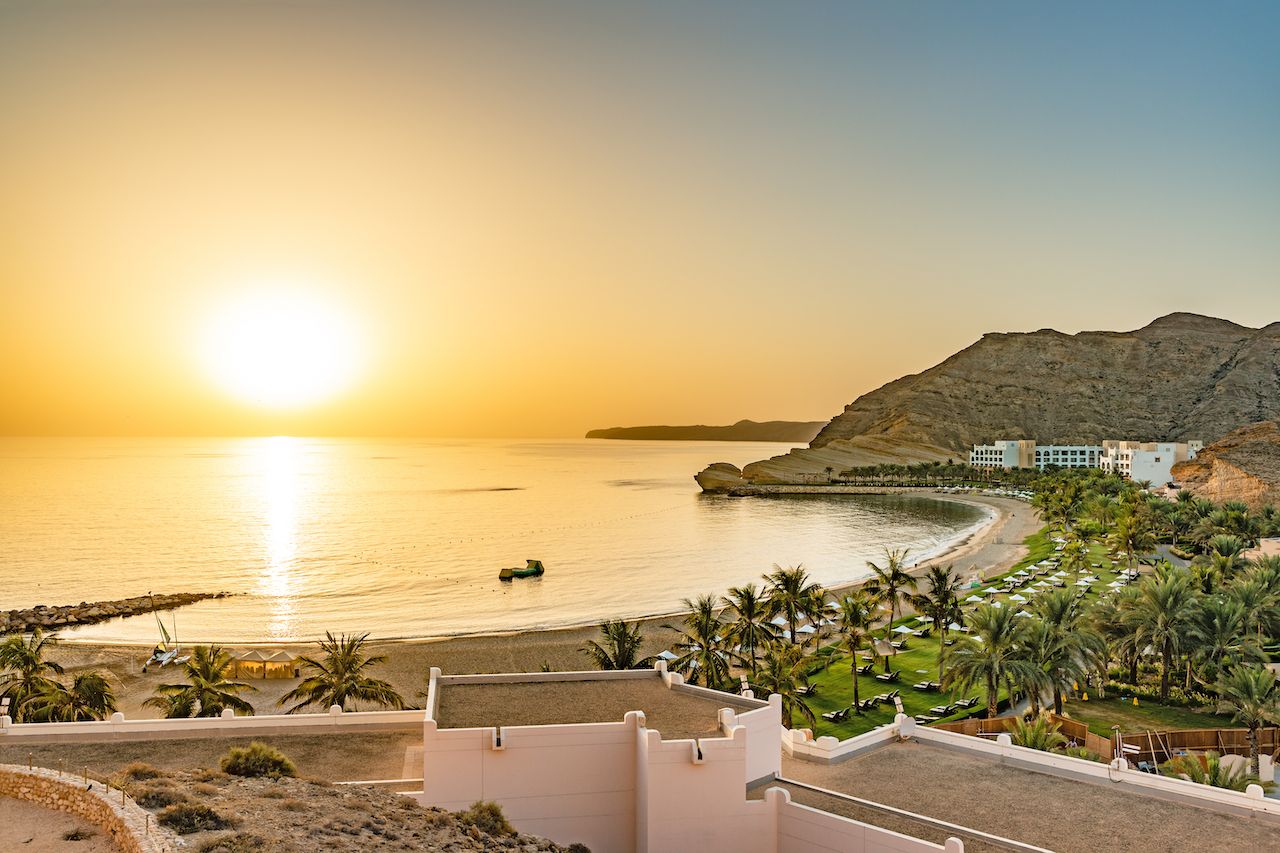 Somehow forgotten behind the glittering towers of Dubai and the vast deserts of Abu Dhabi is neighboring Oman, a fascinating, historic country in the southeast corner of the Arabian Peninsula. The February weather is mild and sunny, where you can enjoy a daytime hike or camel ride through the sprawling Al Wahibi Sands, then cool off in the blue waters of Khalouf Beach.

Of course, sand and beaches can be found a lot of places, and what sets Oman apart are its forts, castles, and other historic structures that make it a fascinating look into centuries past. The Nakhal and Rustaq forts are a worthwhile look into the country’s military history. And a trip to the Al Baleed Archeological Park in Salalah will have you traversing the grounds of the 12th-century port town of Zafar. 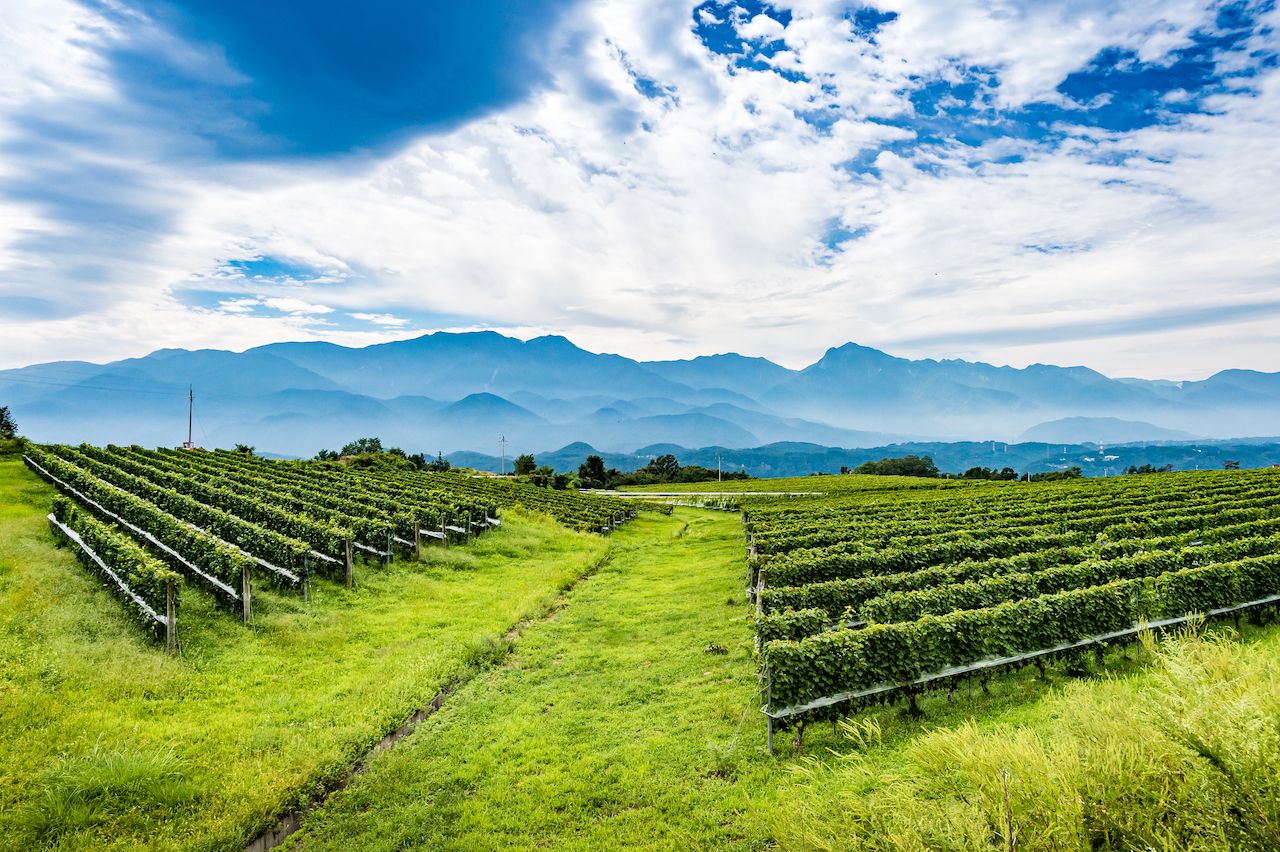 Don’t look now — the world’s next big wine destination is shaping up to be a place best known for sake, even though Japan has been making wine since the 1800s. Taking a cue from Napa Valley’s wine-and-spa culture, the Yamanshi region, just north of Mt. Fuji, combines visits to small, family-run vineyards with its famous onsen spas, creating possibly the best wine getaway destination in Asia. And if you feel like burning off all that alcohol somewhere other than a hot pool, the region is surrounded by ski resorts too, with powder on par with the stuff you’d find in Utah.
If navigating the new-to-you world of Japanese wine seems a little confusing, InsideJapan Tours runs guided trips to the region, where you’ll travel around with an expat local to four small-production wineries. There, you’ll learn all about Japanese winemaking techniques and taste stuff you’d never have a chance to back home. 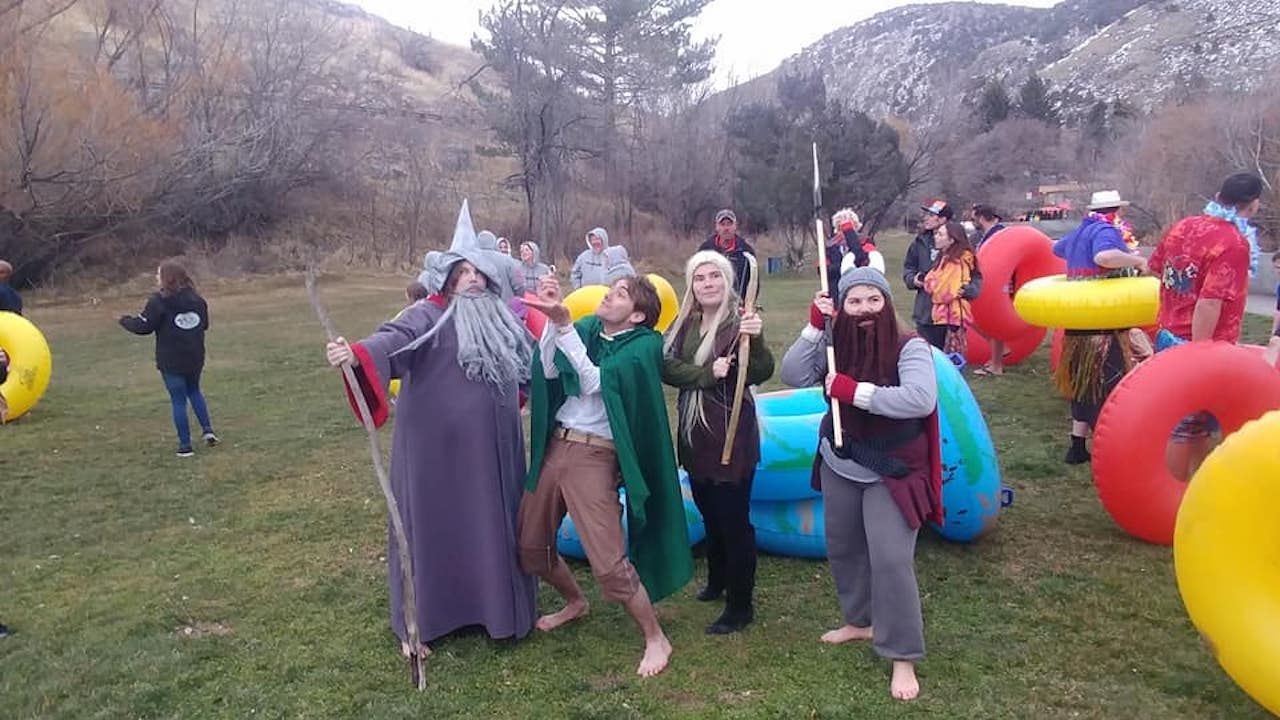 If you’re looking for some unbridled family fun in February, find your way to this mountain town in the southeast corner of Idaho. February 7-9 will see the Lava Hot Springs Fire and Ice Winterfest, when its little downtown becomes a cold-weather carnival of karaoke, comedy, and of course plenty of wine tasting.

After working up a little liquid courage — and warmth — you can join in on the Running of the Bulls, a completely bull-less downtown dash where denizens sprint in their swimsuits through the streets, culminating with a dip in the city’s famous hot springs. If that’s not zany enough for you, try the Polar Bear Float, where you’ll wear that same swimsuit during a swim race down the Portneuf River. Or opt to keep your clothes on, and just enjoy the evening parade of torch-bearing skiers down L Mountain. 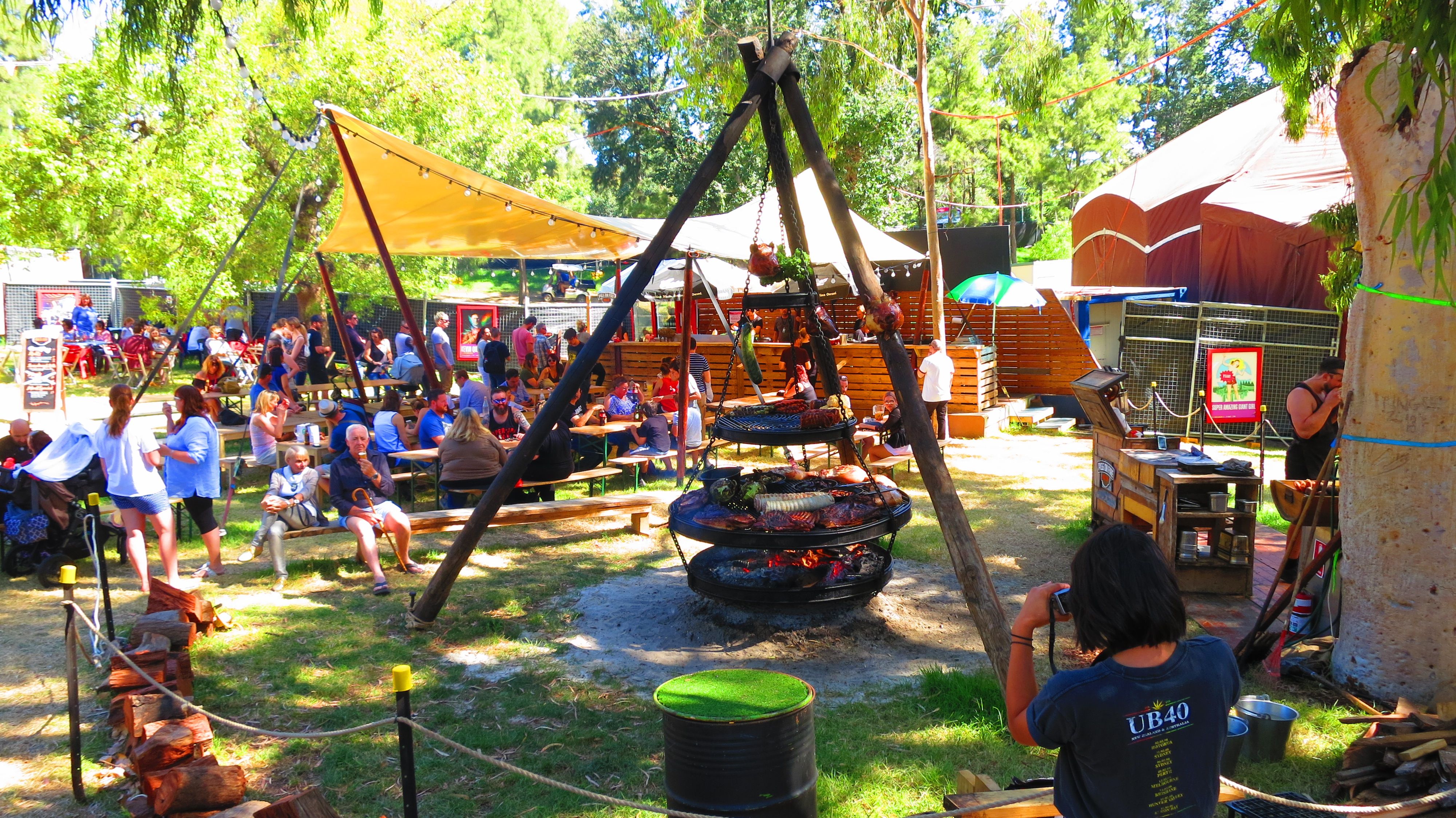 Think of Adelaide in February as a kind of Edinburgh South, just with warmer weather, newer architecture, different accents… okay really it’s nothing like Edinburgh at all, except that it hosts the next largest fringe festival in the world at the Adelaide Fringe. This year marks the 60th anniversary of the festival, where over 1,200 events will take place between February 14 and March 15 from theatre companies spanning the globe.

Of course, getting to Adelaide — or anywhere in Australia — is no small feat, so if you’d like to see a little more of the country, check out Intrepid Travel’s seven-day Adelaide to Alice Springs Overland tour. You’ll begin by spending a couple of days at Adelaide Fringe, then take a road trip through Ouorn, to Uluru, and finish at Kings Canyon.

The post The best places to travel this February appeared first on Matador Network.