I can’t stop dreaming about sweating in a sauna filled with naked strangers. It might seem a curious preoccupation during the current health crisis, but as winter descends, coronavirus cases surge, and I find myself trapped inside a poorly insulated Brooklyn apartment, the recurring fantasy is my escape from reality.

Think about it: a trip to the sauna is the ultimate antidote to frigid alfresco dining in my pandemic-plagued city. Sweating would release the toxins I soaked up while self-medicating my way through 2020 with comfort food and alcohol. Saunas can improve brain function, decrease the risk for cardiovascular diseases, and, according to a Finnish study, reduce the risk of “all-cause mortality.” Everyone who managed to survive the deadliest year in US history deserves a sensible schvitz for making it this far.

But I’m not dreaming of just any sauna.

In my fantasy, I fly across the Atlantic, breeze through passport control, and magically find myself sandwiched between two nude octogenarians in a wood-paneled sauna that’s hot enough to bake bread. I sigh, falling into a meditative state of schwitzen. Borders might currently be closed, but I’m still sweating buckets in Germany.

Saunas and spas are as crucial to German culture as Wagner and wurst. On the night the Berlin Wall fell, Germany’s first female chancellor, Angela Merkel, famously opted to attend her weekly spa appointment before heading westward to celebrate — a sensible priority for anyone who understands the charm of a German bathhouse.

Enjoying the aquatic ceremony at a German spa — often referred to as “taking the waters” — dates back to Roman antiquity, when soldiers soaked in the hot mineral springs of Baden Baden. Finnish-style saunas gained popularity in the 19th century, as did Freikörperkultur (also known as FKK, or Free Body Culture), which celebrates community-based nudity for mental and physical well-being.

Today, most German bathhouses reserve areas for non-sexualized sweat sessions where men and women from all walks of life gather in their birthday suits to forget the world’s worries. These body-positive safe spaces are inexpensive retreats that Germans view as part of a healthy lifestyle. While living in Germany, I visited as many as I possibly could. 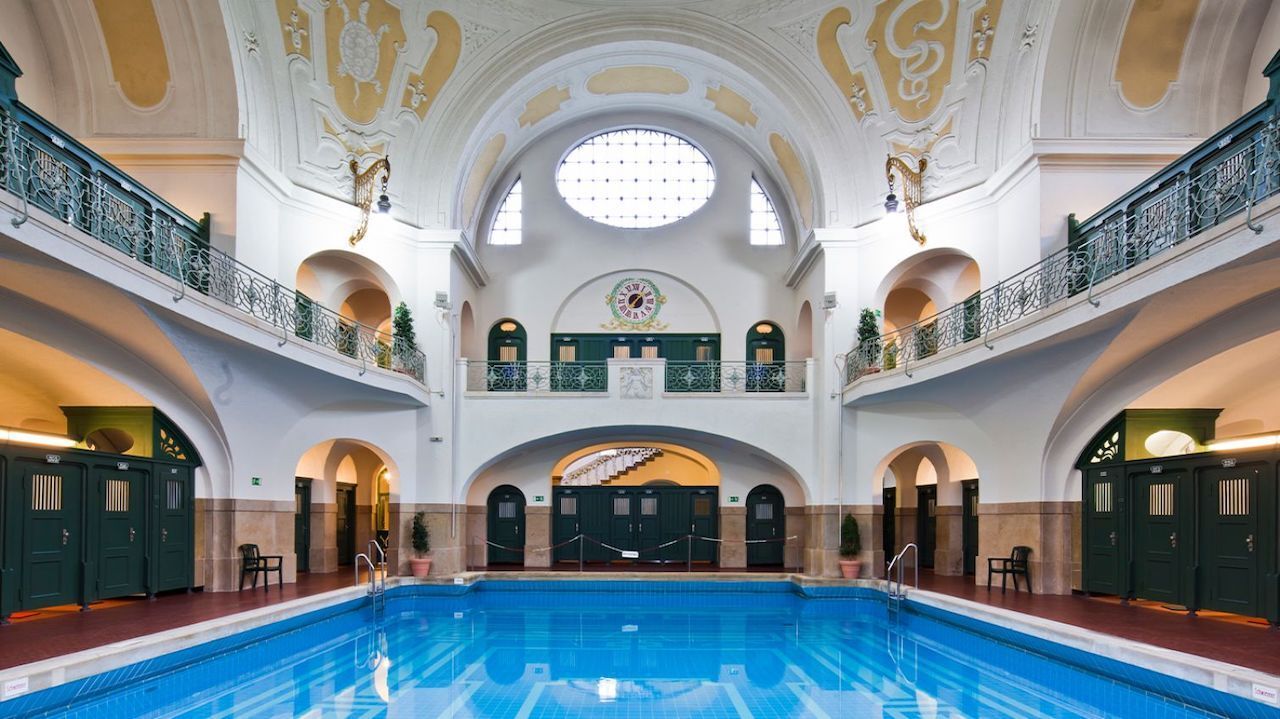 In Munich, sauna-seekers can visit Müllersches Volksbad for a measly $6 and enjoy a Roman steam bath, a Finnish sauna, and a pool housed in an Art Nouveau building that dates back to 1901.

A 30-minute drive outside of Munich leads to Therme Erding — the Disney World of German spas. Kids play on 2,700 meters of waterslides, parents sip pilsners at swim-up bars, and adults can sweat around the world in 28 globally theme FKK saunas. A full-day pass costs $50.

Claudius Therme, a beloved spa in the city of Cologne, only charges $27 for a two-hour sweat-fest with panoramic views of the city.

Friedrichsbad Spa, which abuts the Black forest, is equally inexpensive considering its rich history. For $48, visitors can soak stark-naked in a neo-renaissance complex built in 1877. After Mark Twain visited, he wrote, “Here at the Friedrichsbad you lose track of time within 10 minutes and track of the world within 20…”

Whether you’re near Bavaria or the Baltic Sea, paying $5 or $50, German bathhouses remain refreshingly consistent. The spaces are immaculately clean, the guests are invariably respectful, and leaving with a smile on your face is commonplace. (Seriously, saunas increase an immunoreactive beta-endorphin in blood that scientists found to reflect the feeling of pleasure.)

Spa culture in the US

If Germany is a sauna lover’s Elysium, the United States is a “taking-the-waters” wasteland. In general, American spas fall into three categories: expensive retreats for the elite, post-workout digestifs in stinky locker rooms, or reasonably priced bathhouses with unreasonable levels of grime. The community-oriented spas of Germany have no stateside equivalent. Nudity is rarely permitted.

Chicago’s outpost for AIRE Ancient Baths, an international chain of uber-luxe spas, might offer the same old-world elegance as Munich’s Müllersches Volksbad — but for a hefty $105 per 90-minute session. New York City’s Spa Castle appears to have the Disney World charm of Therme Erding, but as an anonymous staffer told the New York Post several years ago, “There is a big problem with customers having sex in the pools, and the management doesn’t know how to handle it.” San Francisco’s low-priced Kabuki Springs and Spa might be the closest America gets to Germany. Still, nudity is forbidden on co-ed days, and the men’s-only hours feel more like a trip to Provincetown’s Dick Dock than an excursion worthy of Mark Twain’s praise.

With over 19,000 spas in the United States and over 500,000 German-born citizens living around the country, one might assume it’d be easy to discover a Merkel-worthy sauna in America. But in the “land of the free,” too many sauna-goers ignore a key component of the German spa experience: rules. 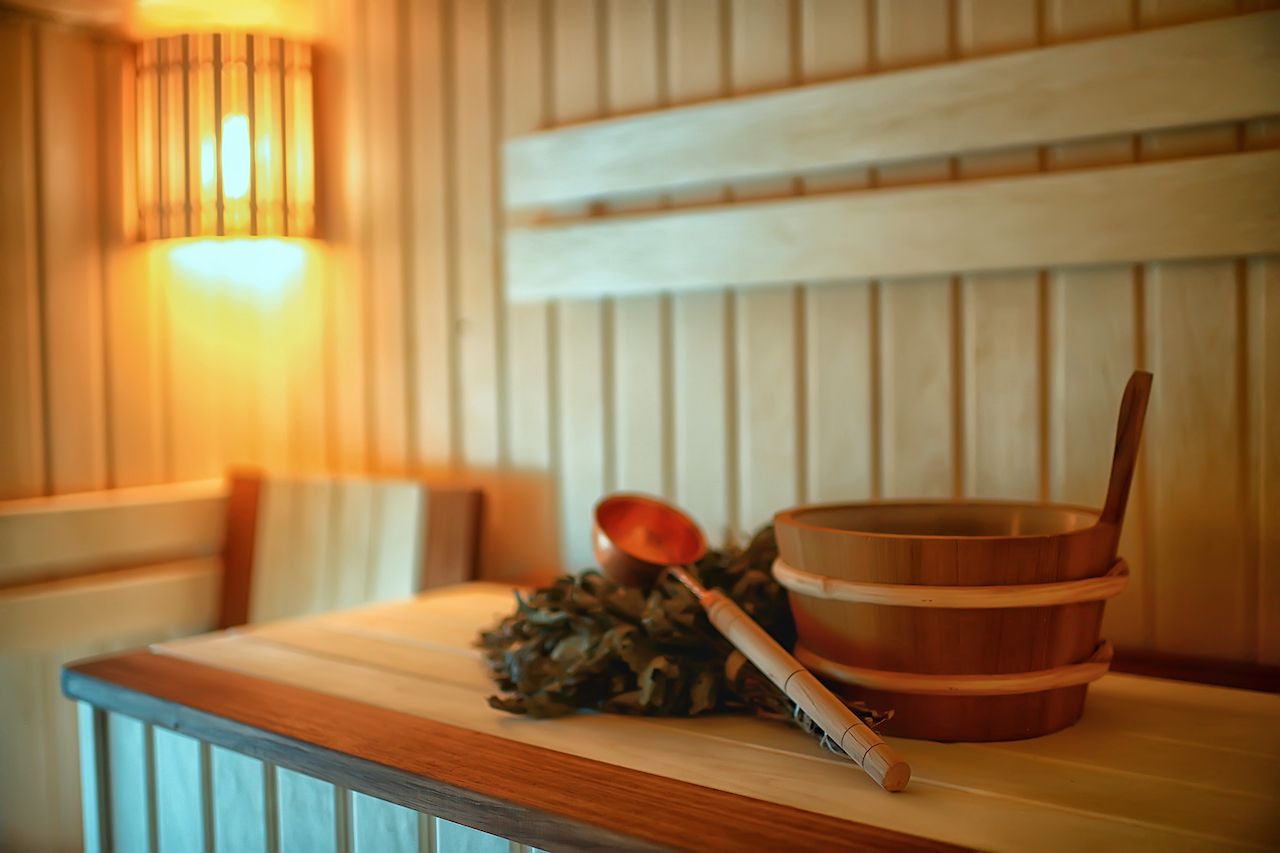 The tired cliche of the rule-abiding German is well-worn for a reason. Ordnung, which translates to “order,” is not merely a German word — it’s a lifestyle. Do not cross the street until the little green man appears. If a sign says verboten, trust that it’s verboten. Just as the Autobahn runs for efficiency, the rules are made with reason. If you aren’t following the rules, a German will happily let you know. The same is true at the spa. Sauna Regeln (sauna rules) is an extension of Ordnung.

Visitors must rinse off with soap and water before entering the spa. After sitting in a sauna or steam bath, guests must rinse again. FKK areas welcome bathrobes, but swimsuits are forbidden. You can cover up with a robe and wear sandals around the complex, but you must always leave them outside the saunas. Two towels should be carried at all times. One towel is for drying post-shower; the other towel ensures your body doesn’t come in direct contact with any part of the sauna bench. No one wants to sit in a pool of someone else’s sweat. Talking in the spa must be kept to a minimum. When in doubt, keep to yourself, and whatever you do, don’t stare in the FKK zones. These are sacred spaces, not sex parties.

The impact of American individualism

In early December, as coronavirus cases soared in my hometown, Governor Andrew M. Cuomo announced a ban on indoor dining at NYC restaurants — a bleak edict for businesses already struggling to survive. The day I read the news, I ran into a neighbor in my apartment building’s elevator. The neighbor, who wasn’t wearing a mask, let out a dry cough as they joined me in the hot, enclosed space. I started to sweat.

I noticed an increasing number of people around my neighborhood who didn’t seem to wear masks in the coming days: a stranger at the grocer’s, a clerk inside a store, a policeman issuing a traffic ticket. I couldn’t help but wonder how these bare-faced buccaneers were linked to the ban on indoor dining, the loss of local jobs, and the infection rate in my city.

I also thought about US bathhouses. NYC’s Spa Castle and San Francisco’s Kabuki Springs and Spa all have German-style rules posted on their walls to make the spaces safe. Are Americans simply unable to follow them? Is our inability to consider how our actions impact the greater community why we can’t replicate the German spa experience?

In a study conducted by the Brookings Institute, 64 percent of Americans who choose not to wear masks — a universally recognized way to reduce the spread of COVID-19 — said their right to avoid the inconvenience of a face mask “is more important than reducing the probability of getting sick or infecting others.” For these Americans, individualism supersedes the benefits of protecting the collective whole. With over 340,000 COVID-related deaths in the United States — more than anywhere else in the world — it’s clear we could benefit from a healthy dose of Ordnung.

A foundation for freedom

As coronavirus cases creep higher, it’s unlikely I’ll be sweating in a German sauna filled with naked German strangers anytime soon. Traveling to the land of FKK saunas won’t be possible for the foreseeable future. Still, I’ll continue to dream of Deutschland — and not just because I’m sick of staring at my apartment walls or because I desperately need to warm up after eating outside in a blizzard. I’ll continue to magic myself to those hot-box heavens because no one fights about the rules in a German sauna; no one protests the cotton barrier between a damp derriere and a wooden bench. The laws make sense, so people follow them. If only the same logic worked for my neighbors without face masks.

John Locke, the Enlightenment philosopher and Father of Liberalism, famously wrote, “where there is no Law, there is no Freedom.” Imagine if Americans started following reasonable rules, just like the community of naked guests at a German spa. Perhaps sitting in a German sauna wouldn’t only be fantasy, and maybe, one day, I wouldn’t have to fly to Germany just to realize my dream.

WellnessWhat Nordic countries can teach us about combating seasonal depression

The post What getting naked at German spas taught me about community and respect appeared first on Matador Network.