On a recent trip down the Lower Salmon River in Idaho, I occupied a rear seat in a dorie, a flat-bottomed, shallow-draft boat used to navigate fast-moving rivers. As we proceeded through the Class III Snow Hole Rapid, the watercraft seemed the ideal vantage point to pass through the trip’s most intense rapids. It was a craft that had helped to make OARS, our guiding company, a pioneer in commercial whitewater trips.

The river flowed at 3,500 cubic feet per second (CFS), significantly below the average for mid-July, but the low water presented its own challenges with fin-shaped rocks darting towards the sky from the river’s surface. On our 70-mile journey, we’d pass four distinct canyons and through the Lower Salmon River’s confluence with the Snake River at Devil’s Canyon. Over four days, I experienced firsthand how the Northwest is coming together to fight for the sockeye salmon and for the rivers that bring the region together. 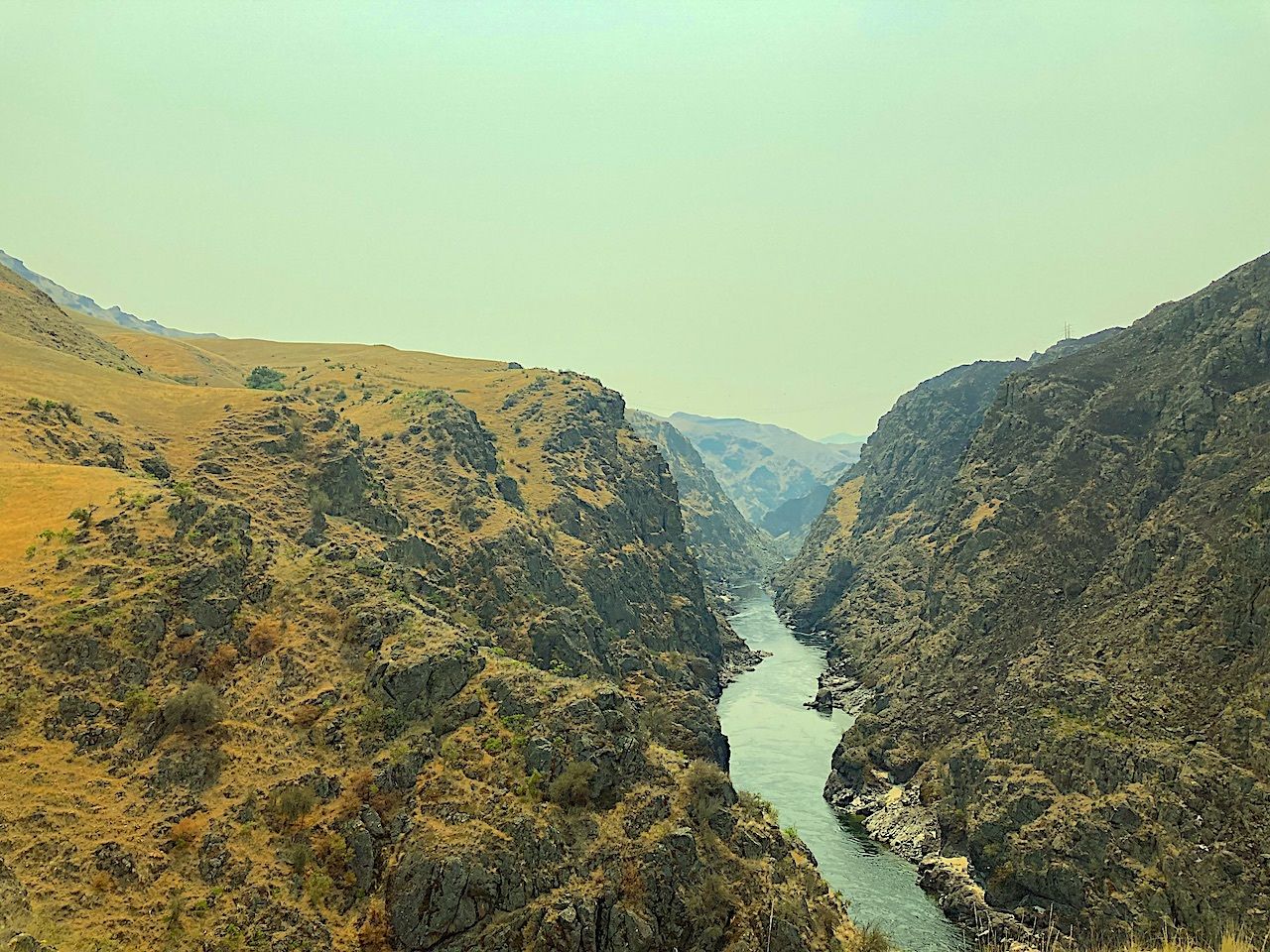 Travelers who navigated the Salmon River in the early 1800s nicknamed it “the river of no return.” Moving downstream proved doable, enjoyable even. Turning around to return to where they’d started, however, proved impossible — given the tight rapids, strong flow, and narrow canyons. Sockeye salmon, for whom the river is formally named, didn’t have that problem. Each year, thousands traveled downstream towards the Pacific and hundreds made the journey back to the breeding grounds, spawning a new generation to make the same run all over again. Today, factors like dammed waterways and increasingly large wildfires mean fewer salmon make it back to their spawning ground.

The hillside just across the river from our starting point — along with much of the 76-mile stretch we would cover on the trip — had burned less than two weeks prior, flames lighting the night sky for the boaters camped along the river’s sandy beaches. The surrounding landscape of grassland sprinkled with ponderosa pines is well acclimated to wildfires. Moderate blazes are not just common and natural, but necessary to maintain proper forest health. Still, witnessing it firsthand isn’t easy.

“It felt apocalyptic to see this place burn and the fish die because the water is so hot,” our lead guide, Sarah Mallory, told me as she guided the dorie through Snow Hole Canyon. “This river is as close as many of us have to a place that feels like home. This is where we feel our best selves, where we are the happiest. To see it like that, it was hard.” 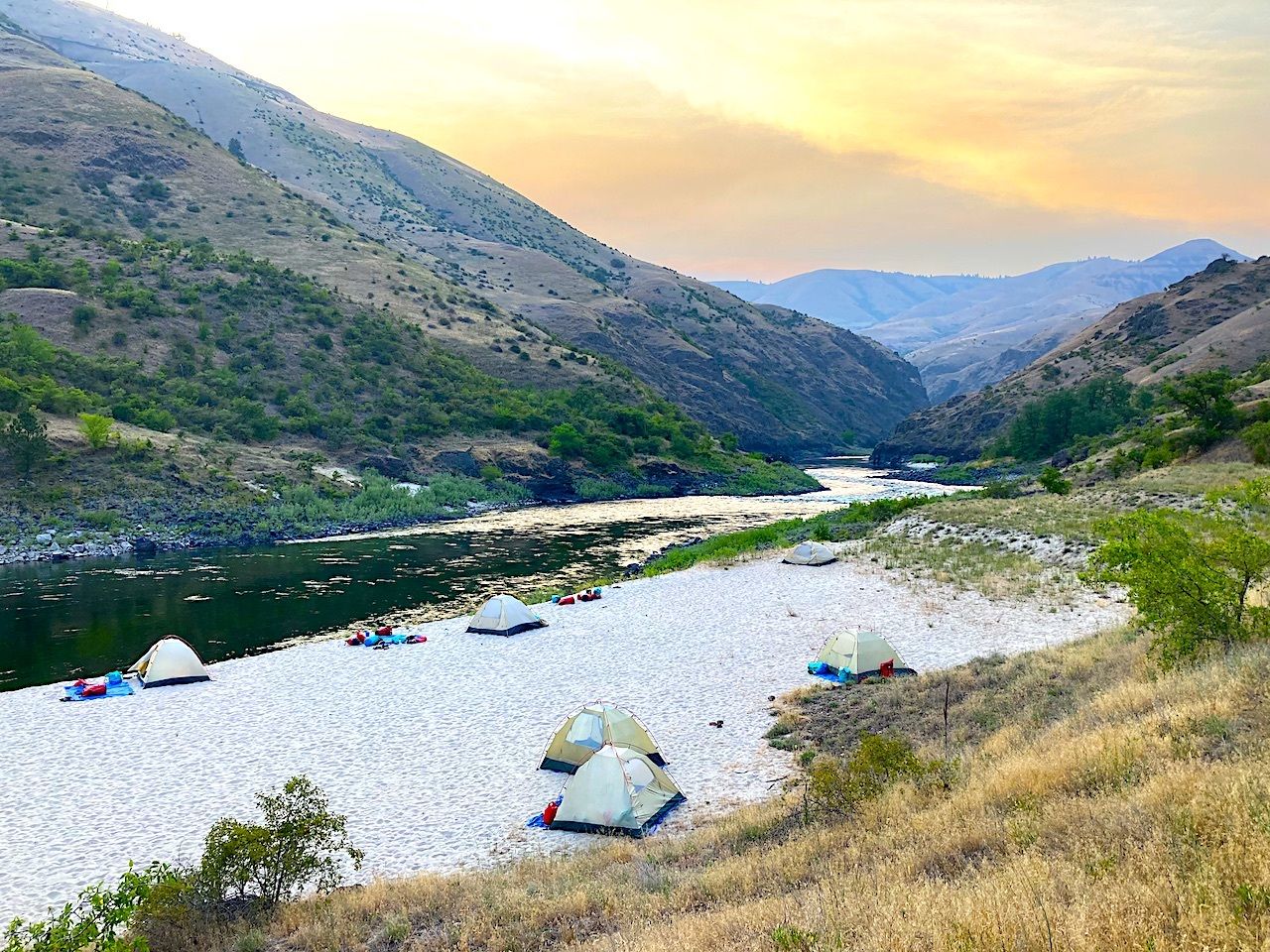 Passion imbued everything our guides told us over four days on the water. Nearly all of them were drawn into this line of work by a life-changing river trip of their own that had revealed to them both the importance of rivers to our ecosystem and to the thrill of floating down them. They were deeply knowledgeable as well. On a quick hike to see makeshift stone housing set up by Chinese miners who arrived in northern Idaho in the 1860s searching for gold, we learned how the car-length spacing and fire-resistant embers of the ponderosa pine make it more resistant to catastrophic fire.

Despite the ponderosa pine’s adaptation to fire, I was struck by climate change’s obvious impacts on the region. Increasingly common large wildfires threaten the salmon that run these rivers. The warmer the days, the warmer the water. And the warmer the water, the lower the level of breathable oxygen in it. More than 200,000 sockeye salmon were killed by hot water while running up the Columbia towards the Snake and Salmon Rivers in 2015 alone, according to a report in The New York Times. The number of fish spawning here each year has dropped from 50,000 per year in the 1950s to about 1,500 per year now.

The Nez Perce and other Indigenous peoples used farming and regular burns to maintain the health of the forest and grassland, optimizing natural fire cycles with their own small prescribed burns. Historically, large fires have happened here every 40 to 75 years, our guides told us. The Great Fire of 1910 burned some three million acres in Idaho and Washington and killed 87 people, largely firefighters. The threat of more common large fires is greater now than ever before due to warmer temperatures combined with over-zealous forest management during the late 19th and early to mid 20th Centuries.

At camp during sunset, the orange glow of the smoke-hued sun rippled off the water. Throughout this day, our second, our sinus tingled most, as we had navigated the tight turns of Cougar and Snow Hole Canyons — where each bend in the river revealed a hillside shrouded in haze from four wildfire complexes that were burning in the Northwest. 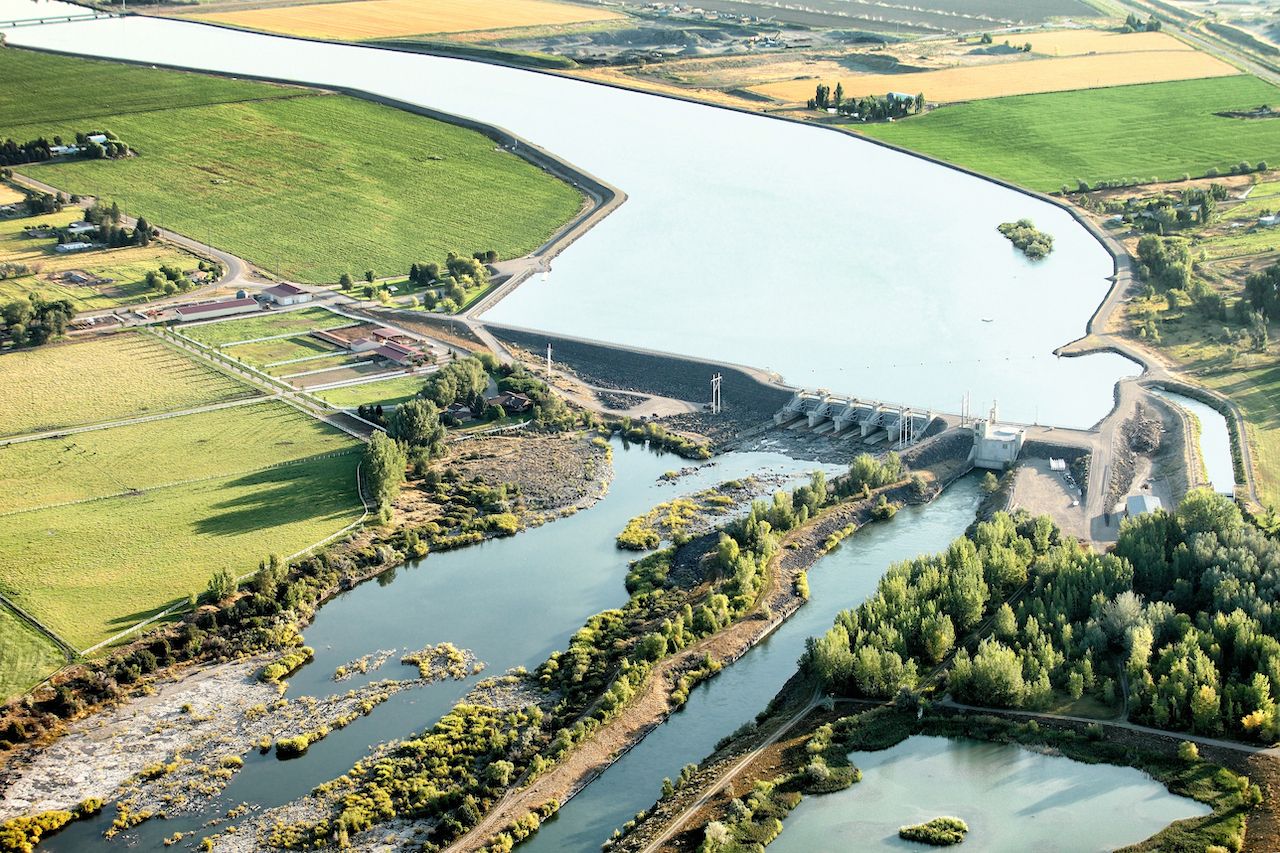 Beyond fire, dammed waterways also threaten sockeye salmon. While the Salmon River ranks among the longest undammed rivers in the US, the Snake River has four controversial dams. These dams, along with water storage facilities and other man-made structures, impact the fish’s ability to run the 900 miles upriver from the Pacific Ocean to their Idaho nesting grounds. This includes running up the Salmon River. Climate change is exacerbating this, with both warmer temperatures and the West’s ongoing drought diminishing water flow.

The battle between dam advocates and those arguing for the removal of the dams has become known in the Northwest as the Salmon Wars. Dam advocates cite the clean hydropower produced, along with the ability of agricultural barges to run from Portland, Oregon, all the way to Lewiston, Idaho, the basecamp for most river trips down the Lower Salmon.

While that provides a major economic boon to the region’s growers and businesses, salmon and steelhead trout in both rivers are listed as endangered or, at the very least, threatened. One advocate for the salmon is Republican Idaho Congressman Mike Simpson. In February of this year, Simpson released his plan to recover the critically endangered fish populations in the region by removing the four dams along the Lower Snake River.

The Columbia Basin Initiative calls for the removal of the dams so that the salmon may more easily make their way back to their breeding grounds. It calls for the clean power produced by the dams, roughly four percent of the region’s total power output, to be replaced by clean sources operated by regional energy producers. It cites data showing that the best way to recover salmon populations is to remove the dams. The plan needs the support of Congress and Simpson’s local constituents, and appears to be heading towards passage.

“Changes of this magnitude might be unnerving at first, but we have a unique opportunity to create a solution that finally puts a stop to the never-ending salmon wars,” said Simpson in a press release announcing the plan. “This concept could take Idaho’s salmon off the path toward extinction and put them on a more certain path of sustainability and viability. We CAN protect our stakeholders and modernize our energy system for the next fifty-plus years, and we CAN do this on our terms.” 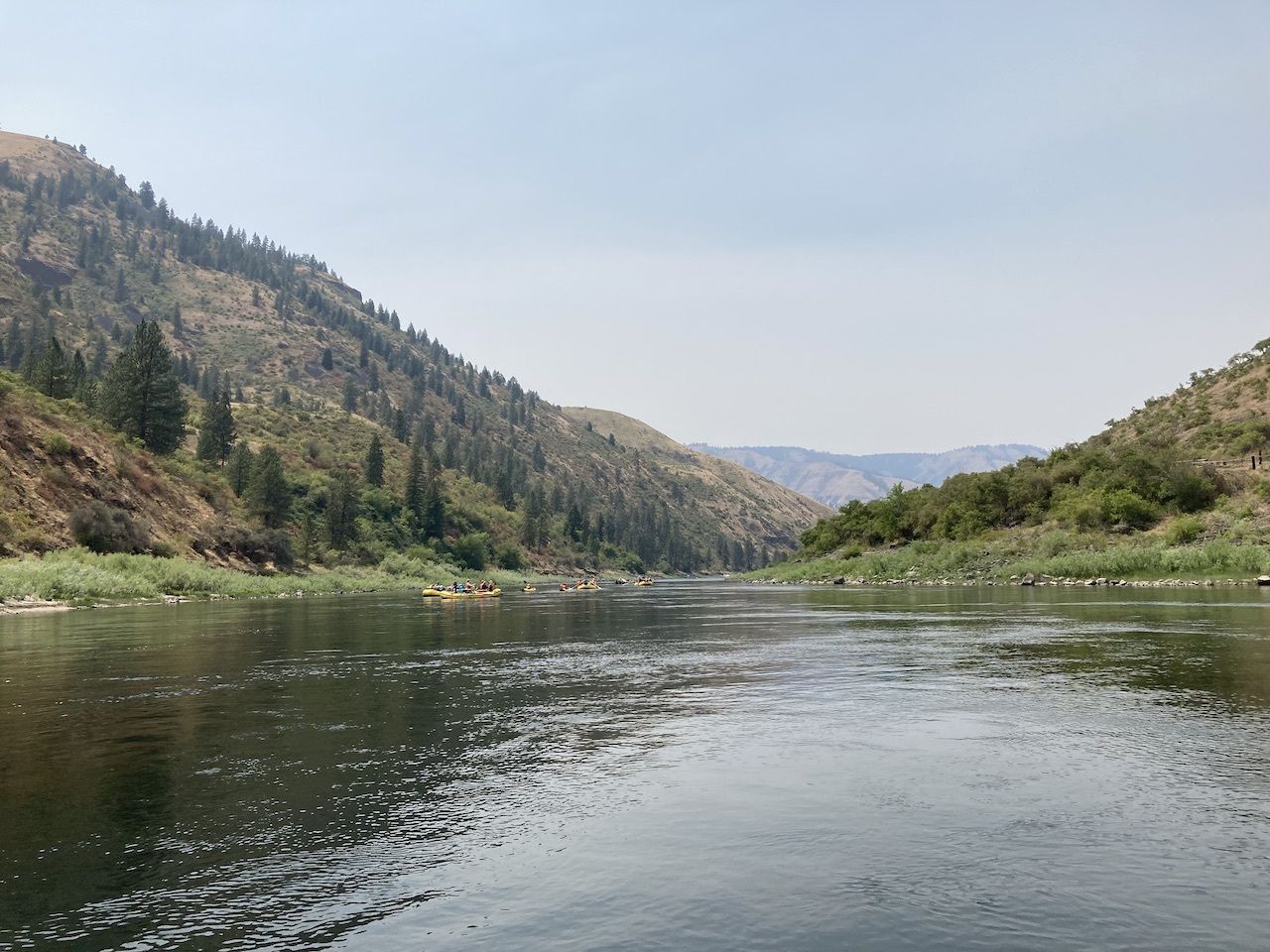 Simpson has partners across the aisle and across sectors. The Nez Perce Tribe released a statement of support, with its Chairman Shannon F. Wheeler saying:

The Yakama Nation released a similar statement of support, as did the Confederate Tribes of the Umatilla Indian Reservation. One non-profit representing the unifying force of rivers is Northwest Strong, a collaborative project among American Rivers, Under Solen Media, and local residents advocating for the Upper Snake, Lower Snake, and Lower Columbia. The group has successfully brought together these unlikely allies.

“The goal is to demonstrate that in the Northwest, we have more in common than we think,” says Amy Kober, Executive Director of American Rivers. “We are united by shared values and a love of this special place. And when it comes to saving salmon and addressing long-standing challenges on our rivers, we need a comprehensive and collaborative approach.” 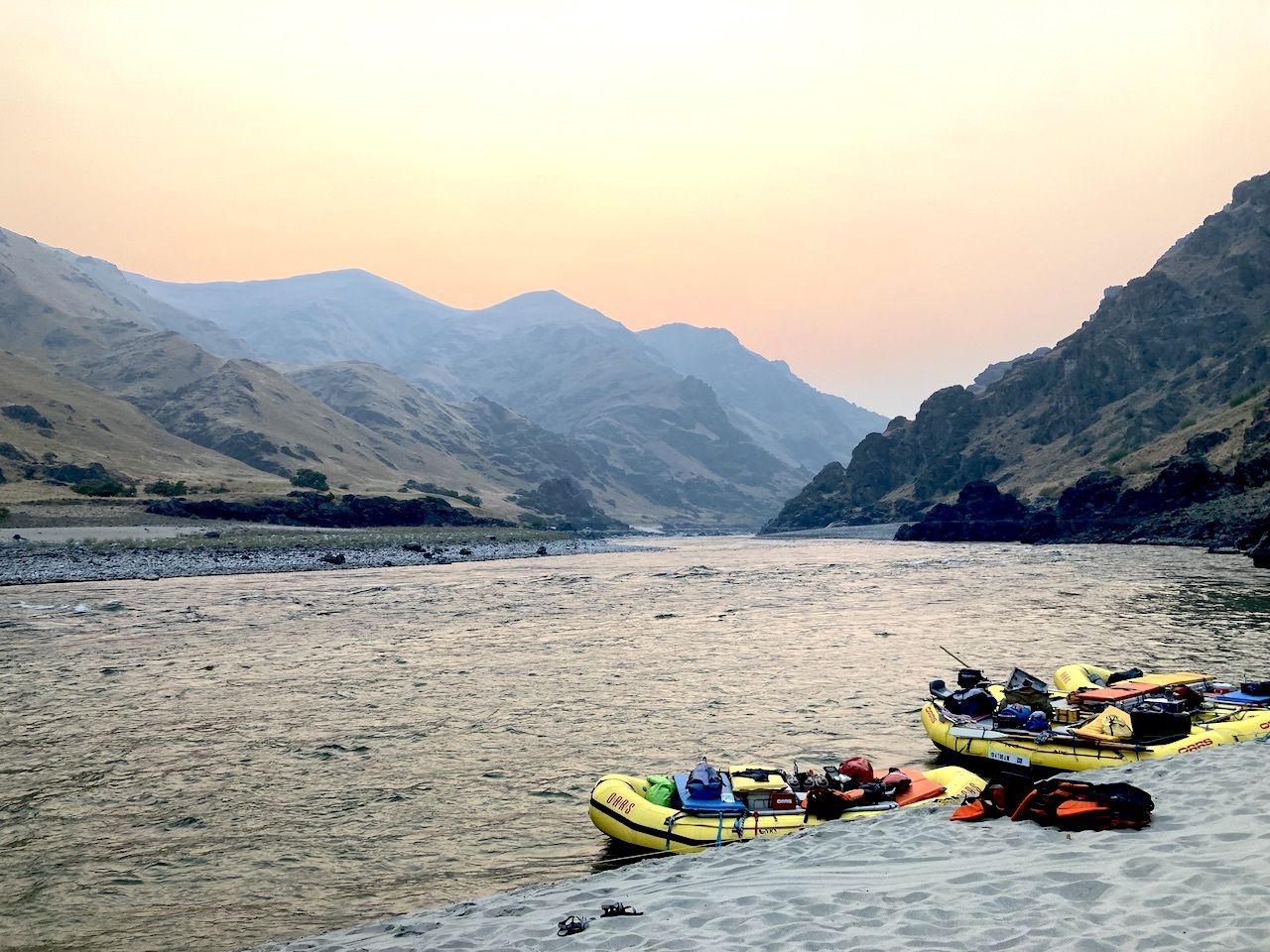 This is where you come in. You can voice your support in three primary ways. First, take an epic river trip with OARS and see this amazing place for yourself. OARS doesn’t just provide its guests with a world-class experience, as evidenced by its many repeat guests, but it contributes a percentage of revenue from each trip to conservation-related causes supporting the rivers on which it guides.

Beyond financial contributions, a multi-day river trip with OARS offers a first-hand lesson in Leave No Trace ethics as they pertain to life on the river. Each stop during our four days on the Salmon and Snake rivers was an opportunity for the guides to teach us about where we were traveling. OARS also posts calls to action on its blog, making it easy for advocates to stay vigilant even when far from the flowing waters of the Salmon, Snake, or other waterways.

Free-flowing rivers support long-term, healthy, and sustainable habitats for fish and the natural surroundings. These rivers do the same for the economies that depend on them. Conservation and the recreational economy that it spawns is that common ground. The rivers of the Northwest can be an example for others to follow.

This is not extreme. It’s not radical. It is the only way forward.

We all want what’s best for the rivers. The jet boaters and the fishermen. The ancestral inhabitants and the hunters. The river rats and the travelers they guide downstream. Even the politicians and the environmentalists.

“This is a once-in-a-lifetime chance to save iconic species and invest in one of the most dynamic regions of the country. It will strengthen the region and the nation, bringing one of our most important rivers back to life,” says Kober. 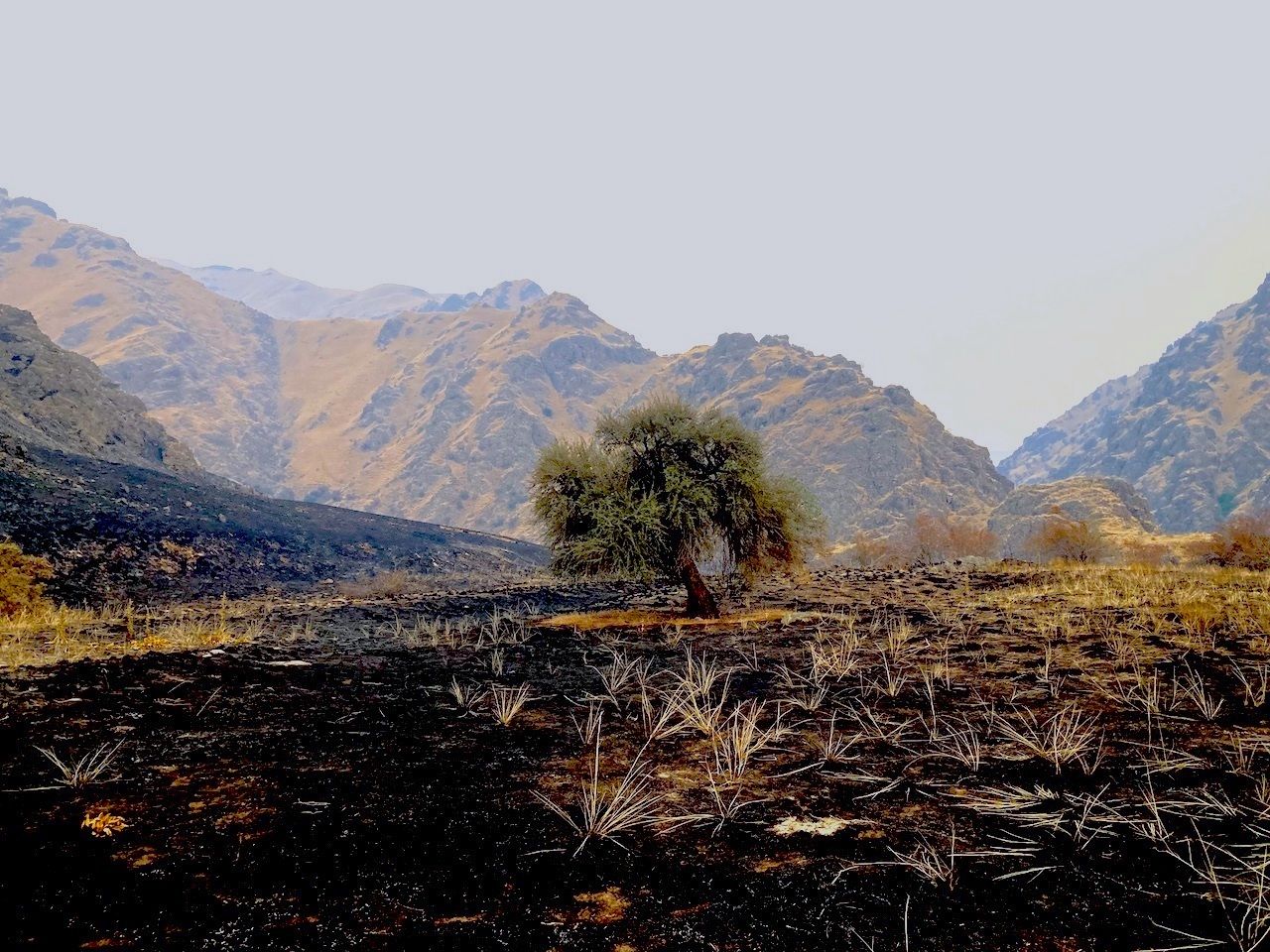 On the final night of the trip, we pulled into Confluence Camp, where the Salmon River spills into the larger Snake River and joins its northwestern flow towards the Columbia River. Oregon and Washington were visible from camp on the shoreline of western Idaho. Looking southeast into the depths of Hell’s Canyon, the water flowed towards me in a bubbly turquoise, an eerie but beautiful contrast to the jagged limestone walls that gave the canyon its name. The area just above us had been on fire less than two weeks before.

I scrambled up an embankment of loose rocks above the confluence to find one solitary tree protruding from the ashes. Parched and surrounded by black, it was a reminder that this land is fragile and in modern times we have asked too much of it. The American West is not my ancestral homeland. I am here as a result of past injustices. But as a lifelong resident of the West, I feel obligated to advocate for the future of the lands that hold me.

The lone tree also struck me as a signal that despite the increasing prevalence of intense wildfires, the hotter summer days, and faster-melting winter snowpacks, there is hope for the West. That hope lies in us, the people who call this amazing place our home — to unite above our differences and let common ground bring us together. The winding corridors of the Salmon and Snake Rivers can show us the way, if we only listen.

The post Raft the Idaho’s Salmon River and actually help the salmon in their fight to survive. appeared first on Matador Network.